Alzheimer’s disease, a disease that frightens many people, and rightly so, but which does not affect as many people as one might think.

Alzheimer’s disease is named after the German psychiatrist and neurologist Alois Alzheimer. It affects 2% of people before the age of 65 and between 2 and 4% of people over 65. The disease affects more people over 80 (15%), 30% of those over 90 and affects more women.

In 2020, according to the 3rd Barometer of the Fondation Médéric, one in two French people will have someone with Alzheimer’s disease in their family circle. By 2050, with the ageing of the population and life expectancy increasing beyond the age of 90, this will represent around 10% of people over 65, i.e. 1.8 million people.

This neurodegenerative disease causes a disfunction of the connections between neurons. It progressively and insidiously affects the cognitive functions of the person.

The media are increasingly talking about it, either from the point of view of identifying the first signs or with advice on how to better support people affected. Many films have dealt with this subject, the latest being “The Father” with Antony Hopkins, then aged 84. 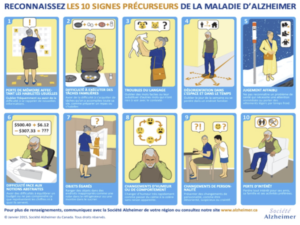 62% of people do not know that the APA (allocation personnalisée d’autonomie) offers the possibility of paying a carer.  In 2010, France Alzheimer estimates that for each patient, the aid received amounts to around €414 per month on average (APA, housing benefit or social aid from the general council). The remaining costs are around €1000 per month.

A need for support for both patients and their carers

Cognitive decline is one of the greatest fears of seniors, but also of their children. They are looking for advice and support both in prevention and in dealing with the disease.

There are various structures to support people suffering from the disease and their carers, such as the Maisons pour l’Autonomie et l’Intégration des malades Alzheimer (MAIA), the Pôles d’Activités et de Soins Adaptés (PASA), which are areas set up within accommodation establishments for dependent elderly people, and many others